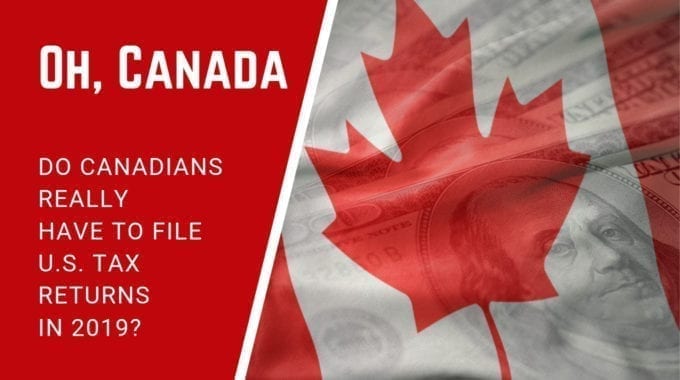 The 2019 tax season has started early this year, especially because of the U.S. tax reform! A mere mention of the word “tax” is enough to make Canadians with dual tax filing commitments in Canada and America balk. So the question of whether you should File U.S. Tax Returns is the one we help answer below.

US tax returns for Canadians is a tricky subject to navigate. It’s highly crucial that all your documentation is in place so that you can claim your refund quickly and sidestep processing delays.

Before we get ahead of ourselves, let’s boil down to the basics, “Do I have to pay US taxes if I live in Canada?” It depends on whether or not you have earnings from U.S. sources. For example, you may be working for a Canadian-based employer, but spend some time working in the United States. Or you need to claim treaty benefits, including exemption from U.S. tax resident status (in that case, you may not be required to file a U.S. tax return, but a special form is required to be filed to claim a closer connection to Canada).

If you are a Canadian individual or a company that provides services to American customers or engages in trading or business activities in the U.S., you may be required to file a tax return with the Internal Revenue Service (IRS), even if you filed your tax return with the Canada Revenue Agency (CRA).

To address one’s cross-border tax commitments, we recommend that US tax preparation for Canadians is handled by qualified and skilled U.S. tax advisors.

To determine what form you may be required to file, you need to understand your tax residency status and whether you are filing individually or through a business entity. Form 1040NR is filed by nonresident alien individuals, while Form 1120-F is filed by non-U.S. corporations that are engaged in a U.S. trade or business and are either subject to U.S. tax or exempt from U.S. tax under the Canada-U.S. income tax treaty (in that case, a treaty-based return is filed with the IRS).

Form 1040NR (U.S. ​Nonresident ​Alien ​Income ​Tax ​Return) is intended for individuals who aren’t U.S. citizens, U.S. resident aliens or green card holders, and who either have U.S. source income or are performing services in the United States.

IMPORTANT: You may not be required to file your U.S. tax return if you only received certain categories of U.S. source income and proper U.S. withholding was done.

Form 1120-F (U.S. ​Income ​Tax ​Return ​of ​a Foreign ​Corporation) is intended for foreign (including Canadian) corporations that are engaged in a U.S. trade or business and have income effectively connected with such trade or business. The treaty-based return is filed when a Canadian corporation relies on the applicable Canada-U.S. income tax treaty provisions to be exempt from U.S. tax (for example, Article V, Permanent Establishment).

The United States taxes foreign persons on income effectively connected with one’s U.S. trade or business (taxed at graduated individual income tax rates or a corporate tax rate of 21 percent in case of foreign corporations) or fixed, determinable, annual and periodical (FDAP) income (typically, passive income) (the collection of tax is accomplished by withholding at source – a general 30 percent withholding tax rate applies unless reduced or eliminated by the applicable U.S. income tax treaty). The gain from the disposition of U.S. real property interest is also subject to tax under Foreign Investment in Real Property Tax Act (FIRPTA) provisions.

Attention, Canadian Corporations! Do You Have a “Permanent Establishment”?

Can Business Be Conducted in the U.S. Without a Permanent Establishment?

Absolutely! However, it depends on the level of activities in the United States. For example, mere solicitation of business may not lead for a Canadian corporation to be deemed engaged in a U.S. trade or business on a federal level (some states, however, may treat such activity as one leading to “nexus” – permanent establishment equivalent on a state level). At the same time, materially negotiating a contract on behalf of Canadian business in the United States may be treated as “conclusion of contract”, while a rubber stamp may not.

Canadian businesses with business operations in the United States would be well advised to perform a permanent establishment analysis to determine if they are subject to U.S. tax. Unfortunately, in many cases little or no due diligence is exercised by business owners in that area. The argument goes like this – my friend has been doing it for 40 years and nothing happened, why should I spend any money or effort on the permanent establishment analysis? The answer is simple – if a Canadian business is deemed to have a permanent establishment in the United States and as such be subject to U.S. tax, the statute of limitations will be open, unless the tax return for the applicable year has been filed. In addition, the business may lose the benefit of business expenses and deductions to reduce otherwise applicable U.S. income – such deductions can only be taken when claimed on a timely filed U.S. tax return.

In some cases, filing a protective treaty-based tax return may be advisable. Filing such a return would protect the Canadian business in the future if the IRS successfully argues that the business created a permanent establishment after all.

IMPORTANT: Failure to file U.S. tax returns is usually associated with high penalties. Some penalties may be as high as US $10,000 per form. In addition, the individual or a business may be unable to claim treaty benefits and be subject to a general 30 percent withholding tax.

Is U.S. income taxable in Canada? Canadian individuals and Canadian businesses that operate in the United States through a branch may be able to claim a foreign tax credit on their Canadian tax returns for the U.S. taxes withheld or paid.

For Canadian Corporations Conducting Their Operations WITH a Permanent Establishment

Must file Form 1120-F with the IRS no later than the fifteenth day of the fourth month after the corporation’s tax year ends. For instance, for a calendar year end Canadian corporation, the tax filings for the 2018 tax year are due by April 15, 2019.

For Canadian Businesses Conducting Their Operations WITHOUT a Permanent Establishment

Must file Form 1120-F with the IRS no later than the fifteenth day of the sixth month after its tax year ends. For instance, for a calendar year end Canadian corporation, the tax filings for the 2018 tax year are due by June 17, 2019.

Generally, for the 2018 tax year, Form 1040NR is required to be filed with the IRS by June 17, 2019. For example, if you sold your condo in Florida in 2018 and need to report the sale and claim a refund for U.S. taxes that may have been over withheld.

Canadians, Don’t Let Cross-Border Taxes Get You Muddled! Our qualified U.S. tax advisors have over 40 years of experience in US tax law. We use our expertise to assist you in tax preparation, filing, and planning.