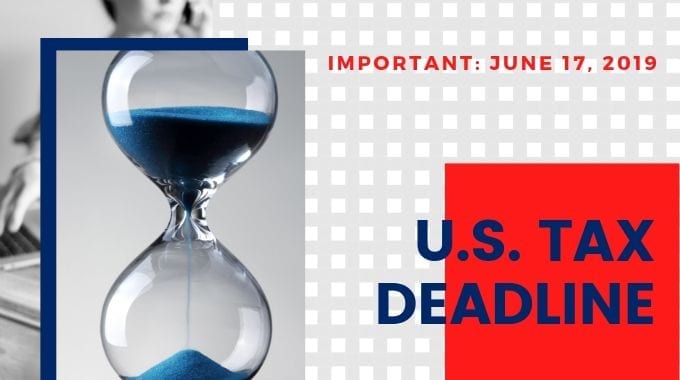 The 2018 U.S. tax season is well underway! Although many believe that the U.S. tax season is over after the April 15 deadline, the deadline for many individuals and corporations outside of the U.S. is June 17, 2019. If you fall under one of the various categories of taxpayers who are subject to the June 17 deadline, please be sure to mark the date in your calendars and have everything filed on time to avoid paying penalties and interest.

The typical U.S. citizen and Green Card holder, living and working in the U.S. is required to file their tax returns with the Internal Revenue Service (IRS) no later than April 15 each year. There is an extension available to those taxpayers, that extends the time to file the return for 6 months.

For U.S. citizens or resident aliens living and working outside of the U.S., you are entitled to an automatic two month extension to file and pay taxes, without needing to file for an extension with the IRS. Interest on any unpaid tax will be charged from the original due date of the return. To qualify for this automatic extension, you must include a statement with your tax return proving that you meet the requirements.

Although this automatic extension is provided to ensure individuals located outside of the U.S. are able to file their taxes on time, an additional 4-month extension can be applied for by filing with the IRS.

The U.S. is in a unique position on the worldwide stage, in that they are part of a select group of countries that tax based on citizenship rather than residency. As such, U.S. citizens living outside of the United States must file their taxes annually to maintain compliance with U.S. tax law.

To assist U.S. citizens who must also file taxes with their country of residency, which can lead to complications in the application of U.S. tax treaties for tax practitioners, U.S. tax law grants an automatic extension of time to file for citizens who live and work outside of the U.S. There are certain other individuals and entities which must file their returns by the June 17, 2019 deadline which are:

The two month extension from the April 15, 2019 deadline applies to U.S. citizens and green card holders that do not live or work in the U.S. One of the following tax Forms may be applicable if this is you.

This Form is the typical U.S. tax return filed by individuals. It is utilized by U.S. citizens and Green Card holders to file their annual income tax returns. The 2018 version of Form 1040 has a variety of schedules that may need to be attached. It is expected that the typical taxpayer will not require any additional Schedules to be attached to their return. If the return includes certain complications, such as claiming specific credits or deductions, you may need to complete one or more of the following Schedules:

Schedule 1 – Additional Income and Adjustments to Income (used for additional income, such as capital gains, unemployment compensation, prize or award money, gambling winnings or if you have any deductions to claim, such as student loan interest deduction, self-employment tax, educator expenses.)

Schedule 3 – Nonrefundable Credits (used if you are claiming a nonrefundable credit other than the child tax credit or the credit for other dependents, such as the foreign tax credit, education credits, general business credit.)

Schedule 4 – Other Taxes (used if you owe other taxes, such as self-employment tax, household employment taxes, additional tax on IRAs or other qualified retirement plans and tax-favored accounts.)

Schedule 5 – Other Payments and Refundable Credits (used to claim a refundable credit other than the earned income credit, American opportunity credit, or additional child tax credit or if you have other payments, such as an amount paid with a request for an extension to file or excess social security tax withheld)

Schedule 6 – Foreign Address and Third Party Designee (used to provide a foreign address or a third party designee other than your paid preparer.)

This Form incorporates your foreign earned income exclusion as well as any applicable housing exclusion and deduction.

A U.S. person that is a direct or indirect shareholder of a passive foreign investment company (PFIC), have to file this Form, provided they fulfill certain requirements. These requirements are based on whether they:

This Form is used to make a treaty-based return position disclosure as required under IRC section 6114. This is usually utilized by dual resident taxpayers to indicate the treaty provision and explain the treaty based position taken.

There are a variety of individuals who are required to file Form 1040NR each year, some of
which include:

This Form is used to claim a closer connection to a foreign country exception to the substantial presence test.

A foreign corporation is required to file this Form to report income, gains, losses, credits, deductions and to factor in their U.S. income tax liabilities.

Missing the tax return filing deadline may mean having to pay penalties and interest for late filing. You may also face a delay in receiving any refund owed to you. U.S. Tax IQ’s accountants have over 40 years of experience in tax law, and make the returns filing process painless.