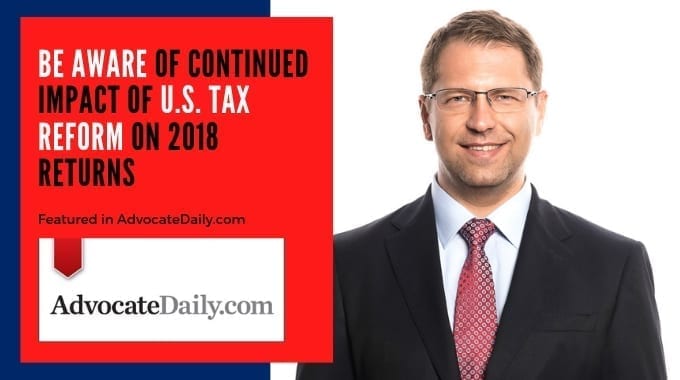 While U.S. tax reform had a significant impact on expats and shareholders of foreign corporations last year, it is critical for taxpayers to be aware of the ongoing relevance of these new provisions as they look ahead to their filing for 2018, Oakville-based U.S. tax attorney (NY, DC) Alexey Manasuev tells AdvocateDaily.com.

As Manasuev, principal of U.S. Tax IQ explains, the Tax Cuts and Jobs Act, enacted in December 2017, made a number of critical changes aimed at U.S. citizens and Green card holders residing in Canada and outside the United States.

One of the most important developments for the 2017 tax filing year for certain U.S. shareholders was the one-time transition tax — also referred to as mandatory repatriation — imposed by Internal Revenue Code (IRC) Section 965, he says.

The transition tax was relevant for 2017 tax year filing for U.S. shareholders of calendar year-end CFCs. The tax due date for filing 2017 returns has generally been April 17, 2018, for U.S. resident taxpayers or June 15, 2018, for U.S. persons residing in Canada or elsewhere.

However, he says, transition tax needs to be top of mind for a number of taxpayers this year when it comes to 2018 tax compliance.

Specifically, U.S shareholders whose foreign corporations have a fiscal year end (other than Dec. 31) must remit transition tax, if applicable, with their 2018 tax return, Manasuev says.

These taxpayers, he says, may have to go as far back as 2015 to determine the transition tax to be reported on 2018 tax return. They will also have to consider the blended rates as different tax rates applied for 2017 and 2018.

“For many of those taxpayers, the transition tax will become reality now.”