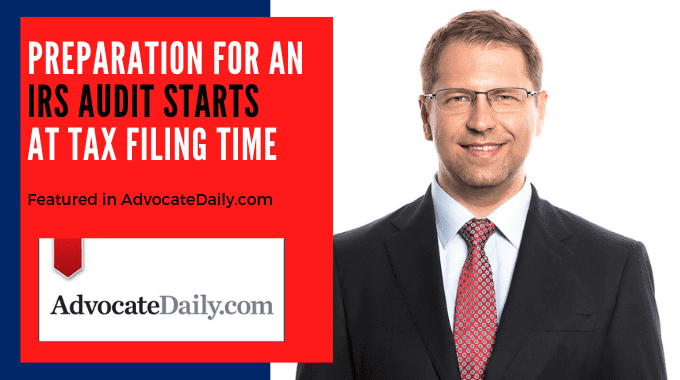 U.S. taxpayers living in Canada may be audited by the IRS at any time and for a number of reasons — but the best time to start preparing for the audit process is not when the notification arrives, but when the original tax return is filed, Oakville-based U.S. tax attorney (NY, DC) Alexey Manasuev tells AdvocateDaily.com.

As Manasuev, principal of U.S. Tax IQ, explains, while there are some simple cases and scenarios, U.S. tax is a complex area — and U.S. international tax is even more complicated, especially in view of tax reforms introduced in late 2017.

“It’s overwhelming for both individuals and businesses, but it’s even more so for U.S. citizens and green card holders who reside in Canada and outside the United States. For them, compliance and dealing with U.S. international tax issues are quite complex and costly.”

At the same time, he says, many taxpayers think about tax return preparation as a stand-alone ‘commodity,’ which wouldn’t generally consider any potential audits.

You don’t want to take inconsistent positions on both sides of the border because ultimately that can come to light, considering the exchange of information between the IRS and CRA and other tax authorities.

Audits, says Manasuev, can happen as soon as a couple of months after the IRS processes a tax return, or up to three years later, which is within the general statute of limitations. Exceptions to this include cases where there has been fraud, or where a return was not filed when required. The audit process can take anywhere from four to six weeks to a few years.

“Many tax return preparers just fill out the returns and file them, as if they were closing their eyes and throwing a dart without knowing where it’s going to land, and 99 per cent of the time, it actually ends up in the right place.”

The taxpayers in these cases often aren’t paying for analysis, research, or for the preparer to document the tax position taken — which Manasuev says is key when it comes to defending an audit if one arises…