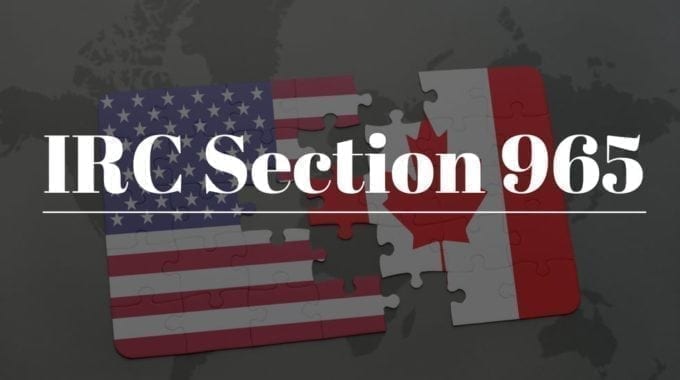 An Overview of IRC Section 965

The transition tax (also referred to as mandatory repatriation) was imposed by the new U.S. tax law in IRC Section 965. The U.S. Department of Treasury and the Internal Revenue Service (IRS) have been busy in issuing guidance to taxpayers on how to deal with the transition tax and are currently working on regulations that are supposed to address many critical issues and unresolved areas of the new tax provision. Recently, the IRS has released a list of Frequently Asked Questions (FAQs) with respect to the transition tax imposed under IRC Section 965. This information pertains to the tax payment obligations and return filing deadlines, as well as other areas relevant to reporting the transition tax on one’s individual income tax return for the 2017 and 2018 tax years, as applicable.

The Questions and Answers section below is based on and is prepared pursuant to the IRS FAQ About Reporting Related to Section 965 on 2017 Tax Returns (available at: https://www.irs.gov/newsroom/questions-and-answers-about-reporting-related-to-section-965-on-2017-tax-returns) (last visited June 1, 2018). Where feasible, some explanations / term definitions are added.

Whether you are a U.S. shareholder of a Canadian or foreign corporation, a Canadian tax accountant or Canadian lawyer who believes your clients may be subject to the transition tax, we are here to help.

A U.S. Shareholder of a Deferred Foreign Income Corporation (DFIC), as well as a direct or indirect partner in a U.S. partnership, a shareholder of an S corporation, or a beneficiary of another passthrough entity that is a U.S. shareholder of a DFIC are subject to reporting under IRC Section 965.

Note that U.S. Shareholder is defined as any U.S. person that owns (directly, indirectly, or constructively) 10 percent or more of the voting stock in a foreign corporation. Note that for the tax years of foreign corporations beginning after January 1, 2018, an expanded definition of the U.S. Shareholder applies. The term “U.S. person” includes individuals and entities.

DFIC is any Specified Foreign Corporation (SFC) that has accumulated post-1986 deferred foreign income (based on positive earnings and profits) as of November 2, 2017 or December 31, 2017.

The IRS provided a detailed chart showing how the IRC Section 965 amounts should be reported on U.S. Shareholders’ tax returns. Generally, the transition tax should be reported separately from the taxpayer’s otherwise applicable U.S. tax liability. In addition, the IRS requires attaching an IRC 965 Transition Tax Statement to be attached to the 2017 return.

Q3: Are there any other reporting requirements associated with IRC Section 965?

Yes. If an individual is required to report an IRC Section 965 amount on their 2017 U.S. income tax return, they are also required to include an IRC 965 Transition Tax Statement. The statement can be filed in paper, attached to the 2017 income tax return, or filed electronically in PDF format (.pdf), attached to your e-filed return with a file name of “965 Tax”. If more than one Transition Tax Statement are attached, they all can be combined into a single .pdf file. Importantly, the statement must be signed under penalties of perjury.

The IRS requires the taxpayer to maintain proper records supporting the calculations made on the Transition Tax Statement. These amounts and associated calculations will be used in subsequent reporting years, even as the method of reporting will likely change based on modified instructions to other information reporting filings such as Form 5471, Information Return of U.S. Persons With Respect To Certain Foreign Corporations .

The IRS provides a sample statement on its website. The sample can be replaced by any statement that does not necessarily mirror the sample statement, as long as the Transition Tax Statement contains the following information:

There are various elections that can be made with respect to the income included on a 2017 U.S. tax return pursuant to IRC Section 965, including:

The following persons are eligible to make an election as per IRC Section 965 of the Code:

A domestic partnership or an S corporation that is a U.S. shareholder of a DFIC may not make any of the elections under IRC Section 965. IRS Notice 2018-26, section 3.05(b) provides further information about applicable elections for direct and indirect partners in U.S. partnerships, shareholders of S corporations and beneficiaries in other passthrough entities that are U.S. Shareholders of DFICs. Treas. Reg. §1.964-1(c)(3) and IRS Notice 2018-13, Section 3.02 discuss how an election can be made on behalf of an SFC.

Q6: When must an IRC Section 965 election be made?

The IRC Section 965 election must be made by the due date (including extensions) for filing the income tax return for the relevant tax year. For an election to pay net tax liability in installments the first installment must be paid by the due date (without extensions) for filing the return for the relevant tax year.

The election is made by attaching a statement, signed under penalties of perjury, to a 2017 U.S. income tax return. Note that all elections must be accompanied by a separate IRC Section 965 statement relevant to the particular election being made by the taxpayer. In case of an e-filed return, the Taxpayer must attach a PDF for any election (see Answer 3 above).

Q8: Is Form 5471, Information Return of U.S. Persons With Respect To Certain Foreign Corporations with respect to all SFCs to which a taxpayer is a U.S. Shareholder, required to be filed with the taxpayer’s 2017 tax return, regardless of the status of the SFC as a Controlled Foreign Corporation?

Yes. Form 5471 is an international information return and is required to be filed, even if an SFC is not a CFC because it provides the IRS with the information used to:

The taxpayers must complete the identifying information on page 1 of Form 5471 above Schedule A, as well as Schedule J.

The IRS and the Department of Treasury announced in Notice 2018-13, section 5.02, that they intend on issuing regulations to provide relief from filing of Form 5471 for those taxpayers who are considered to own stock in foreign corporations by “downward attribution” due to the repeal of IRC Section 958(b)(4).

Q9: What are the IRC Section 965 reporting requirements for partners, shareholders, or beneficiaries of U.S. partnerships, S corporations and other pass through entities?

Schedule K-1, which is used to report each shareholder’s share of income, losses, deductions and credits and subsequently used by the shareholders to report this information on their tax return, should also include a separate statement, attached, for each DFIC for which such passthrough entity has an IRC Section 965(a) inclusion amount. The following information should be included on Schedule K-1:

Q10: How is the tax actually paid?

The tax is paid via wire transfer, check or money order. Taxpayers that would normally be required to pay through the Electronic Federal Tax Payment System provided by the U.S. Department of Treasury should submit the IRC Section 965 payment via wire transfer or they may be subject to penalties. Please refer to the specific procedure for using wire payment or check or money order payment as there is a specific tax code number and/or information to write on the form of the payment.

There are two separate payments that are made with respect to a taxpayer’s 2017 income tax return and IRC Section 965. One payment is with respect to tax owed without taking into account IRC Section 965 and the other is a separate payment made with regards to the tax owed from IRC Section 965 that is not otherwise satisfied by a payment or credit. If the taxpayer receives an extension of time to file pursuant to Treasury Regulations §1.6081-5(a)(5) or (6), the taxpayer’s due date for the IRC Section 965 payment is also extended. Otherwise, both payments must be paid by the due date of the applicable return, without extensions.

Q11: If an individual has not already filed their 2017 U.S. income tax return via electronic filing, when should the return be filed?

Electronic filers should file on or after April 2, 2018. Taxpayers who file via paper are required to file before the due date of their applicable return.

Q13: How will the IRS apply 2017 estimated tax payments (including crediting overpayments from 2016) to a taxpayer’s net tax liability under IRC Section 965?

The IRS will apply 2017 estimated tax payments to a taxpayer’s 2017 net income tax liability without regard to IRC Section 965 and without regard to any income or deduction properly attributable to a dividend received by such U.S. shareholder from any DFIC. The remaining estimated tax payments will then be applied to the tax liability that arose from the IRC Section 965 calculation, including amounts subject to installment payments with the relevant election.

Q14: If a taxpayer’s 2017 payments, including estimated tax payments, exceed its 2017 net income tax liability determined without regard to IRC Section 965 and the first annual installment, which was due in 2018, pursuant to an election under IRC Section 965(h), may the taxpayer receive a refund of any excess amounts or credits for these amounts to its 2018 estimated income tax?

No. A taxpayer may not receive a refund or credit of any portion of properly applied 2017 tax payments unless and until the amount of payments exceeds the entire unpaid 2017 income tax liability, including all amounts to be paid in installments in subsequent years.  If a taxpayer’s 2017 tax payments exceed the 2017 net income tax liability, determined without regard to IRC Section 965 and the first annual installment, which is due in 2018, pursuant to an election under IRC Section 965(h), the excess will be applied to the next successive annual installment, which would due the following year in 2019. This would continue to annual installment due in the following year of 2020 and beyond.

Q15: What should I do if I am uncertain how IRC Section 965 applies to me and/or am unable to do the relevant calculations myself?

Engage the services of a qualified U.S. tax professional who is comfortable with the new legislation and its application.

Q16: What is the 2017 filing deadline for U.S. citizens and Green card holders who live in Canada and otherwise outside the United States?

Consult with US Tax IQ today to receive the right advice on planning, preparation and compliance.